Why I chose MWC 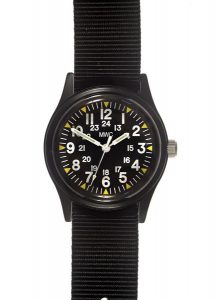 Anyone that knows me knows that I am very particular on which products I choose to purchase. Things like quality, environmental impact, manufacturing location, and customer service all come into play along with smaller nuances.  So when I was searching for a new quartz wrist wrist watch (so I don’t beat up my antique mechanical one) after much research it came down to two watches.  The Bertucci A-1S and the MWC “Vietnam.”  I have a small wrist, so I needed something in the sub 40mm category.  The Bertucci is 36mm and the Vietnam is 33mm.  They both utilize the Miyota 2035 quartz movement, made in Japan.  The Bertucci is assembled in the US with a Chinese case and US strap (unsure on face and hands).  The MWC is entirely made in Japan.  Bertucci had accessible customer support, but getting information about the watch’s build was like pulling teeth – they just wanted me to go to their website.  The problem was, the website just said “Japan movement” and I wanted to know what one.  Eventually they did help and told me what it was.  MWC, on the other hand, was extremely helpful right from the first contact.  They were very quick to reply to email messages and were informative, forthright, and friendly. 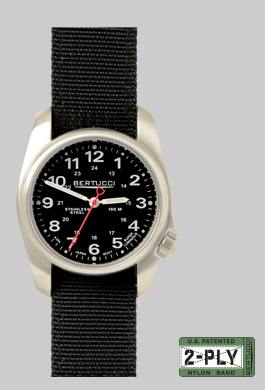 I do have to say, the fact that Bertucci is an American company is a big plus (MWC is head-quarted in Sweden).  And I’ve heard they make a quality piece.  But the prices are high and it bothers me that the cases are made in China.  Also, functionally speaking, it was no better (given the same movement) as the MWC that was about half the price.  Aesthetics were an issue as well, with the Bertucci being a bit clunky despite it’s small 36mm width.

Both watches have lume.  The Bertucci uses swiss luminous on the hour markers and swiss super luminous on the hands.  Reviews have shown that the hour markers do not stay lit for very long and are effectively useless.  The MWC uses an unknown lume on it’s numbers and hands, but in my opinion it holds up pretty well.    Under a good charge it definitely is visible in the dark for 3-4 hours without issue.  Some say it lasts longer than that, but I haven’t tried.

In the end, I chose the amazing customer support, excellent build quality, Swedish company with Japanese manufacture as the winner and now sport an MWC “Vietnam” as my daily wear watch.  I couldn’t be happier.  It was fairly inexpensive, has been very reliable (I got it 2 months ago), and looks great.  The Miyota 2035 is quiet and feels very sturdy yet refined when setting it.  Now granted all my other watches have been inexpensive Timex and similar, but still, this is head and shoulders above that.  I will say, even though the Bertucci isn’t perfect, it has me intrigued enough that if I could afford it I’d get one just to try it out.  I just can’t see myself wearing it often with those huge strap tangs.

Note:  There are many on differences between the two like mineral glass on the Bertucci (recessed about 2mm to keep it from getting scratched) vs acrylic on the MWC etc, but those ended up not making a big difference in my decision making process.

This entry was posted in Personal. Bookmark the permalink.