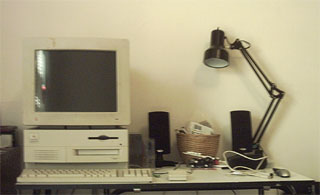 The year was 2004.  I was given a 10 year old Apple Quadra 650 from one of my sister’s friends.  It was dirty.  It was heavy.  It was slow.  I decided that even though this machine was designed before the dawn of the internet, it would be a great idea to make this a little server – because, why not?  So I did.  With some upgrades (as described above in my table from my old website), this machine did handle a light HTML-based website with ease.  Of course, there was little to no load most of the time either.  After less than a year of running this machine as a server for HTML, IRC, and FTP, I decided to take it down and purchase some “real” webspace.  It was getting expensive (and very warm in my closet) running this 24/7.  Since then it has been in storage.  It really doesn’t have a good use (for me) anymore, and I have found it a new home, on a shelf on display in a classroom.  So this is my last “thank you” to the wonderful “Quad Serve,” the first computer I overclocked, my first server, and my first major overhaul/upgrade – thank you Quadra 650.

This entry was posted in Computers and Hardware, Hobbies, Home and Homestead, Personal, Technology, Web/Internet. Bookmark the permalink.